“we have become far too smart scientifically to survive much longer without wisdom”
Mike Cooley, The Myth of the Moral Neutrality of Technology

“The thrust of Mike Cooley’s human society focused analysis has a striking parallel in the rapidly growing world-wide movement – led by young people – against climate change and for radical, green policies in all the major aspects of our economic, social and individual lives to counteract it. It is a development profoundly welcomed by him as the climate change threat to our planet and its people looms ever larger. In a sustainable world economy, the values and goals of Michael Cooley’s work on human centred technology are sure to be reflected.”
John Palmer

“Through his historical insights into the evolution of digital technology, Mike Cooley provides a stimulating narrative for understanding the impacts and implications of the new digital technologies of machine intelligence and automation … Cooley’s main concern is the misuse of technology, which can amongst other things create a frantic work tempo for some and the dole queue for others. Although humans with their skill and ingenuity were able to create technological change from the early stages to the advance of artificial intelligence, the society which has given birth to them tends to fail to keep pace.”
Karamjit S Gill 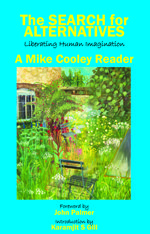 The Search for Alternatives