Brexit Testimonies from EU Citizens in the UK

Imagine… Imagine you left your native country because you wanted to explore your neighbouring world and embrace the European dream. Imagine you truly believed that the European Union was your home and that, as well as being a citizen of the country you were born in, you were also a citizen of Europe. Imagine you fell deeply in love with your new country. Imagine you built a life there, married, had children, a career, started a business… You felt happy and totally integrated. You were at home.

Then one day, your new country decides to vote to leave the European Union, which means that all the rules you have built your life on are going to change. One morning, after years and even decades, you suddenly feel unwelcome, unwanted, betrayed. Your certainties, your life and your security are gone. Your sense of identity too. Through no fault of your own, you are stuck in a painful limbo.

This is what has happened since the Brexit Referendum in June 2016 to the EU citizens who have made their life in the UK. This book of testimonies is their voice, their stories from Limbo, haunted by the poignant question: where is home? 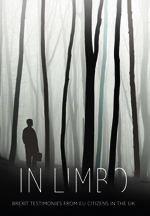