Brexit Testimonies from UK Citizens in the EU

From an idea by Elena Remigi. Expanded and revised edition.

For many UK citizens who have built homes, families and lives in Europe, these words express how they have felt since the EU referendum upturned their lives.

After the 1992 Maastricht Treaty created the EU as we know it, the generations who have moved from Britain to elsewhere in Europe have done so with an assumption of belonging. They could live, love, work, start a family, start a business, own property, and contribute to society in the same way that someone could move from Kent to Cumbria in the knowledge that their citizenship and status would remain inviolable.

For UK citizens in Europe, the 2016 referendum shattered that security overnight. Their assumption of belonging was annulled, their assured citizenship called into question, the very ground beneath their feet removed.

The first volume, In Limbo, provided a platform for the testimonies of EU citizens living in post-referendum Britain. In Limbo Too complements this with the narrative of Britons living in Europe. This book is their voice, their stories from Limbo. 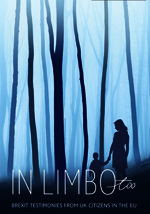